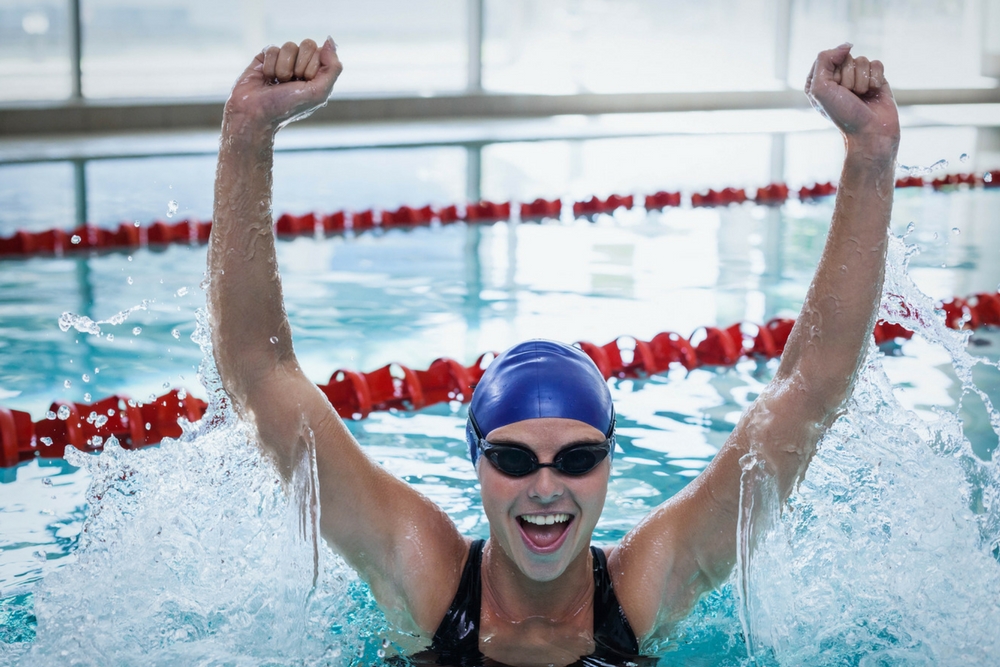 All my years of club swim meets, Age Group Champs, Senior Champs, and high school meets do not compare to the Conference Championship Swimming and Diving Meet I just attended. It was a real “feel good” experience as a swim parents and I am thrilled that my son is a part of it. I had been told that it would be high energy with a lot of spirit, but that did not begin to describe it. The two things that struck me were the level of enthusiasm and the sense of team.

Many teams had a decorated seating area in the bleachers with pompoms, flags, posters, and more. Each team also had an area along the outer wall where they honored the seniors. There were posters, ranging from professional action shots to homemade photo collages, in addition to quotes, pictures, and “fat head posters”. An impressive site upon entering.

The spectators were all decked out in team apparel, from t-shirts to jackets to red and white striped pants. I am not sure I saw anyone not wearing team colors over the entire four-day meet.

Before the meet, the teams cheered. I don’t mean just cheered, they CHEERED! The cheers were led by the swimmers, not the coaches, and they had creative, organized cheers with some gathering in a circle and swayed while cheering. It was amazing to watch. It was also hard to understand the words when several teams were cheering at once but the level of enthusiasm was obvious. Parents rushed to the front of the bleachers to take photos and video of the cheers – I took several myself.

In college swimming, the team captains fill a vital leadership role by inspiring all of the swimmers, sharing important information and providing encouragement. Before each session, the coaches would say a few words, then the team captains would talk to the group. The captains made a point of giving extra tips to the swimmers who were experiencing their first Conference Champs Meet.

The first events were relays and the noise level almost raised the roof on the aquatic center. The swimmers not participating in the relays were on their feet, standing together and cheering. The medal ceremonies were held immediately following each event and the team members of those medaling rushed to the podium to congratulate the swimmers and to watch.

The diving events were interspersed between the relay events and gave everyone a chance to sit down and be quiet for a few minutes. The teams with strong divers are at a definite advantage in terms of scoring the meet as the points are added together to calculate total team points. It was great to see the swimmers and divers cheering for each other and the parents hanging out together as they are truly one team.

The individual events began on the second day and the swimmers were intense about their swims but still cheering when not swimming or warming up or down. The sense of camaraderie among the swimmers was obvious as swimmers cheered for each other as they achieved best times and made finals or consoled each other if a race did not go as planned. The swimmers knew each other’s goals and were thrilled when they achieved them. One guy broke 50 seconds for the first time in the 100 Fly and the entire team rushed to hug him when he returned to the team area. Another kid had tears streaming down his face after winning a gold medal – all of his teammates knew his story and why this win was so important. I saw examples similar to these time and time again throughout the meet.

The parents cheered for all of the members of the team as they swam. They congratulated and high fived each other after good races and screamed during the close races. Many of us were hoarse at the end of each session. The level of support for each other and for all of the swimmers was impressive. By the end of the weekend, we knew so much about our new friends and their swimmers and some families were even making plans to get together in the off season.

There was a lot of analysis going on behind the scenes as the swimmers and divers calculated what they needed to accomplish in order to move into a higher position in total team points. When the team points were updated on the scoreboard, loud cheers filled the area.

In our conference, the 1st and 2nd place positions were pretty well set going into the final relays as were those at the bottom of the ranking. But the teams in the middle positions were pretty close and they all wanted to improve their position compared to last year and some hoped to medal by placing 3rd. The cheering during the relays was wild as many of the races were tight.
The Conference Championship Swimming and Diving Meet had as much spirit as a Sweet Sixteen basketball game or a football College Bowl Game. It was so much fun and I cannot wait for next year. Go team!

Michelle Lombana is committed to helping parents like herself whose children want to swim in college.  When she’s not attending college swim meets, she can be found at www.collegeswimmingguide.com.