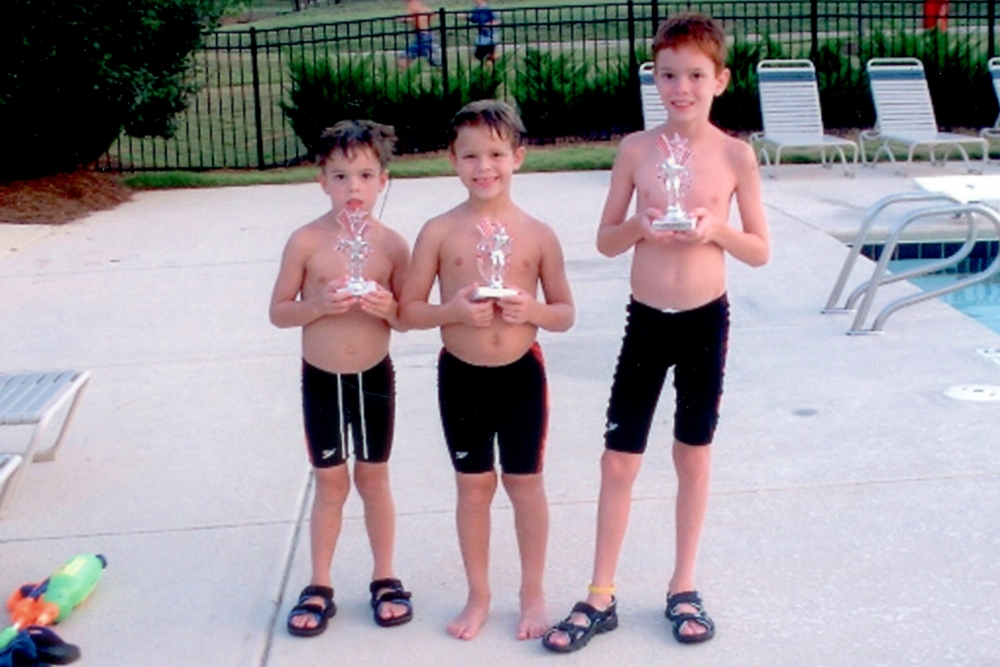 Do you remember how you first got your swimmer to swim the length of the pool on his own? We all have stories…. Sometimes we have to figure out what exactly will motivate us to accomplish our goals, this is very individual and will change depending on the goal and other factors going on in our lives.

In hindsight, I should have been able to predict which of my sons would decide to become a year-round swimmer and to swim in college by their approach to summer league swimming.

I had to motivate my kids to swim the length of the pool the first time – each of them wanted to do it but they all experienced varying degrees of anxiety. My oldest son was 5 years old when he joined summer league swim team and he enjoyed the social aspect as much as anything. He was a typical first-born and was anxious about new things. He would swim the length of the pool but would stop on the lane line 2 or 3 times. The Fisher Price Rescue Heroes were very popular in 1999 and Andrew wanted “Matt Medic” badly. We made a deal that we would buy it for him if he did not stop at all during the next meet. He was ready and that promise was all he needed – he had a new “Matt Medic” Rescue Hero the following weekend.

My middle son was totally different and was not typically fearful of anything physical. Matt was pole vaulting out of his crib and over his safety gate at 16 months old! For some reason, swimming the length of the pool intimidated him as nothing else had. He was four years old when he joined swim team and was very excited about it but he would take about three strokes with each arm then would grab the lane line or the side of the pool. The coaches could not figure out how to motivate him until one asked me what his favorite item was from the concession stand. During the next meet, Coach Marie walked ahead of him along the side of the pool holding out a bag of M&Ms. Every time Matt looked up and thought about stopping, he saw the bag of M&Ms and kept going. Once he reached the end of the pool, he got the bag of M&Ms as well as a feeling of satisfaction.

My youngest son was three and was taking swim lessons from the head coach of the summer league team. His main goal in life was to keep up with his two older brothers so he wanted to participate in swim team like they did. Coach Grace told him that if he swam the length of the pool during his lesson, he could swim in the meet that Saturday and for the remaining half of the season. That was all it took – Greg took off and swam the length of the pool without any trouble and hasn’t stopped since.

With all three boys, it was simply a matter of figuring out what motivated them. There is a big difference between a toy and candy and being intrinsically motivated. The toy and candy motivators worked for casual summer league swimmers but my youngest son needed something much deeper to keep swimming at the club level and into college.

There are so many ways to motivate kids and people in general.  The trick is to understand what level of motivation is needed, and how the person will respond.  Potty training and swimming on any level are some of the first situations where we’re able to understand our children’s motivations and what works for them.

Michelle Lombana is committed to helping parents like herself whose children want to swim in college.  When she’s not figuring out how motivate swimmers, she can be found at www.collegeswimmingguide.com.